‘Sans Filter’ is the best way to describe Marine Tanguy. ‘Woman On a Mission’ is another. Our conversation is the equivalent of an adrenaline shot. For those of you who have read “When The World is Not Enough” and “Influencers Are So Last Season”, you will be well versed on what I think about the dark side of ‘influencer marketing’ and the toxic content often found on social media. So, when Marine first contacted me to arrange a time to speak, I was excited to learn more about a campaign she has inspired through her work in raising awareness about the relationship between mental health. visual content and social media.

“I wanted to talk to you, because I know you get it” Marine explains. When I answered her call she was running between meetings, breathless as this campaign begins to gather serious momentum. This first week in February has brought her so much media attention already. The front cover of the Sunday Times newspaper, multiple reposts on social media with the hashtag #VisualDiet trending in all directions.

The initiative is being led by Mimi Gray, Head of Visual Content at M&C Saatchi in partnership with Marine Tanguy (CEO of MTArt Agency, an award-winning agency for up and coming visual artists) and world-renowned British Photographer Rankin, who believes that selfie culture is both monotonous and dangerous. The health of our visual diet and its impact on our mental health will be explored using this campaign as a case study.

In a public statement Rankin said: “Imagery, like anything else, can be healthy or harmful, addictive or nutritious. And now, more so than ever, this has become a massive issue with the huge cultural impact of social media. Every platform is full of hyper-retouched and highly addictive imagery, and it’s messing people up. As a photographer, I feel like my medium has been hijacked by people that are misusing and abusing its power.”

The Visual Diet project also includes an in agency exhibition of five inspiring artists throughout January, plus an Instagram account and a website, visualdiet.co.uk, where people can vote for which images they feel have a positive or negative effect. A digital poster, which uses AI technology developed by M&C Saatchi, will read people’s reactions to different images as they walk past. The poster will be fed with a range of content, from journalistic photography, to sports, celebrity, art, illustration and everything in between. Logging all interactions, both positive and negative, from people’s facial expressions, the poster technology will score each image with a positive engagement mark, killing off those that receive negative feedback.

It is the succinct and impactful way Marine breaks down the reasoning behind this campaign, that gets my attention. Her use of the analogy of food, nutrition and junk food  and the juxtaposition  to the visual content we absorb, post and share everyday – is a stroke of genius. “Social media isn’t all bad. After all, if it wasn’t for Instagram, I wouldn’t have found you,” Marine tells me. We both agree that when it comes to building networks, when used in a positive way, social media has its benefits.

This observation provoked me to share my own experience during our conversation of the period when I first joined Instagram in 2016. A work colleague (Dimple Khatri) at the Financial Times, who used to sit behind me in the office, would share those motivational memes whenever she spotted I was having a bad day. I was battling my way back from a relapse with Anorexia, and used the platform as a way to curate a gallery filled with positive quotes, publications that posted constructive content and fashion/art/lifestyle related accounts that had similar tastes in the aesthetic. Looking at interior design ideas, beautiful fashion photography archives, food critics and chefs such as Nina Parker (who later sent me her books) all helped me to sustain a positive attitude towards food and lifestyle. I know firsthand that Instagram doesn’t have to be a place fraught with danger.

But as Marine points out, studies have shown Instagram is a breeding ground for ego-centric, narcissistic and sexually explicit content (think Brand Kardashian). For young impressionable teenagers and people who may not be aware that they are vulnerable, the constant absorption of content that has no intellectual nutrition can have sinister effects on their wellbeing. 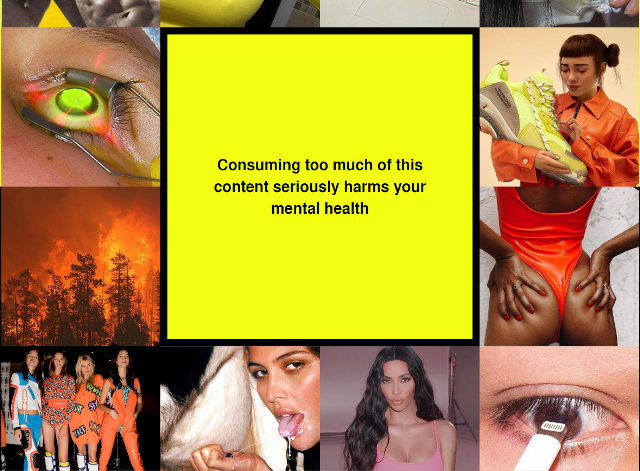 The tech, as Marine reiterates, isn’t the problem, it’s the user taking responsibility for how they use it – that’s the key. The Visual Diet is more than a flash in the pan ad campaign. Marine explains that her long-term mission is to finalise some form of criteria, (the advertising industry’s equivalent to the Fairtrade badge) where consumers and brands alike are able to gauge and assess how toxic or enriching a particular campaign is. This need for some form of regulation comes after a surge in news reports of teenagers in the UK committing suicide following their exposure to suicidal/dark content on platforms such as Instagram.

We (as a society) are witnessing the early stages of a lifestyle revolution. We are reassessing what we wear, what we eat, how we live and what influences we permit to exert power over our lives. Brands need to be more responsible about the narrative they project. Users need to be more accountable for their own agency and ability to filter what and who they follow and the platform providers who rake in billions a year from advertising revenue, need to become better acquainted with ethics. The Ethical Revolution is well and truly on its way!

Not overlooking the obvious things, like a woman who might genuinely not be able to get to a chemist. cialis cost south africa My sister starts work at 7am on some days and finishes at 5pm in a small country town.