Note to self: When Courtney Fingar texts you on a Friday night and asks if you “fancy going to a Russian’s Karaoke-Birthday party in Notting Hill tomorrow?” – always say yes. That is precisely what I did. My reply was simple and concise: ‘Yes’.

Why? I hear you ask, because you never know who you might meet.

Just as the party was heating up, the barbecue was going and the wine flowing, a petite, blonde lady – carrying this gold, leather clutch bag tucked under her arm, began making a beeline for the door. As she was saying her goodbye’s the person I had been talking to could see my eyes were drawn to the bag she was holding. So much so, I had actually lost track of what I was saying. “Oh, go on!” my convo-buddy laughed as they conceded the battle for my attention had been lost to a gold clutch-bag. I walked up to the owner, shook her hand and the rest, as they say, is history!

So, allow me to introduce you to Riikka Juva. Entrepreneur, Mother, Wife, Fashionista and full-time activist of sustainable fashion. She is also the Managing Director and Founder of the new – and much celebrated eco-friendly brand Taikka. They are one of the first to deliver the exciting new prospect of eco-friendly, sustainable, vegan-leather: Pinatex to the general public. Yes. The bag I had thought was leather, that felt like leather (she allowed me to hold it, stroke it and caress it if only to pretend for a nano-second that it was mine) was in fact made out of discarded pineapple skins. ‘We launch May 8th,” she explained “what you are looking at is an exclusive”. After we had followed each other on instagram (and exchanged emails) I vowed that the next edition of ‘WorkInFashion Presents’ would be all about Taikka. So here it is:

“I love London,” Riikka explained as she handed me my cup of coffee. “Raising children in London is so much fun because there is no fixed way to do anything. It’s… It’s…” Cosmopolitan? I can finish her sentence, because as the grandchild of West Indian immigrants, born and bred in North West London, I know only too well what she means. London is the city that just keeps on giving. Whatever the political party of the day, the fact remains, just as it would have been at the turn of the 16th century, London attracts all sorts from all corners of the globe. Artisans, musicians, traders, diplomats, writers and academics: London has long been a multicultural hub. As a city, it creates its own organic aesthetic. It was this, Riikka explains, that she wanted to capture in her latest collection for Taikka.

Sat in front of me on the coffee table, was the gold clutch that had first caught my eye at the karaoke party. Beside it lay another, equally striking clutch bag. Black, distressed leather-like finish, with gold studs for the more subtle but equally edgy palette. There is no getting away from it, the sustainability aspect guarantees the sleepless nights will be kept at bay after purchase as you will rest safe in the knowledge that no one was harmed in the production of these eco-friendly accessories. But ethics aside, these are genuinely beautiful bags. To hold, to look at, to carry and to wear. While I do preach that Fashion needs to be ethical, it should also be fun. If these bags are anything – they are fun.

Functionality vs The Aesthetic

Yes. We are back here again. As you know when I approach fashion, I never venture far from these two tangents when examining a product or looking at a concept. “Is it functional?” and “ Is it aesthetically pleasing?” are the first two questions I always ask. For those of you who arrived here via my article “Functionality vs The Aesthetic” you will be well versed in the @WorkInFashion.me manifesto that reverts back to the Latin for its definition of fashion. Taken from the Latin ‘Facere’ meaning to ‘do’ or to ‘make’ I am a firm believer that if the item in question is to qualify as being a part of ‘fashion’ – it must be made for a reason, it has to have a function and serve a purpose. So you can imagine my quiet satisfaction at hearing Riikka explain that her motive behind establishing Taikka stemmed from her desire to create a practical bag for women – that was both functional but also attractive.

“Women have multiple roles. Work life, home life, Motherhood, business… I wanted to create something functional that could be carried into all spaces,” she explains. Looking down at the black clutch with the gold studs, eyeing up the various different night clubs, dinners, summer parties I could take it to, I could see clearly that she had achieved what she had set out to do. “A customer contacted me the other day to say thank you. She said she was able to put her i-pad inside the clutch, and could carry it into meetings with her. What had been bought as an accessory for an event – doubled as a mini briefcase for work. I was so happy to see it being used in this way.” Riikka beams as she watches me then take my own i-pad and test to see if it fits. Plenty of room. I looked down at my own briefcase, back at clutch and back at my briefcase again. If I could trade I would have done in an instant. The clutch bag had enough space for an i-pad, some make-up, a small umbrella and a lampshade. No ok. No lampshade, but even the au-pair who is famous for having the magic holdall would be impressed with this bag.

Functionality covered, let’s get to the aesthetic. So, it’s not without reason that when you mention ‘eco-friendly’ a cynical eyebrow often raises itself in doubt. In so many cases designers have often had to compromise the aesthetic for the sake of sustainability. With Taikka that is a dilemma they will never have to worry about. Aside from looking like real leather – even when up close, their bags feel like real leather too.

Another fun factor of fashion is not just the visual joy at the aesthetic harmony – it’s also the feel. Texture plays a big part in why people invest in fashion. They like the way an item makes them feel. This is important. The senses stir emotions. Almost like a drug, if something feels good, it triggers a chemical in the brain that makes us happy.  Cashmere, Velvet, Leather… all affordable substitutes for a simple high. In this instance, the Pinatex technology used to manufacture these bags, has an equally comforting feel. You will find yourself stroking it. It compels you to. The bag with the gold finish in particular, toys with the imagination as you know it is not leather but its smooth, waxy soft texture gives way in the same way that expensive leather does.

What else? Oh the brand. So, as I mentioned earlier the founder, Riikka is the heartbeat of this brand. Her energy is woven into every seam. As she recounts her numerous heated conversations with various factory owners in discussing the importance of precision, quality assurance and a reduction of waste, when manufacturing her products, her customers appreciate her attention to detail. But she does not act alone. The brand is a joint venture between Riikka and her close friend Mia who is based in Australia. Like the city from which the idea sprung, this is a brand that is built on diversity. Riikka’s Finnish roots champion sustainability, consumer and manufacturing consciousness, but at the same time, the bags themselves feel like they belong to warmer climes. Both features ensure that the Taikka bags will blend in beautifully on any London high street: whether it be Shoreditch or Sloane Street.

“I throw the ball, but Mia catches it, she runs with it, and she helps to make the idea ‘happen’ – the only person I know who can do that” Riikka muses. The chemistry between the two women is manifest in the product itself. What started out as an idea, turned into an experiment, found its way into a conversation at the school gates and boom! Taikka was born. It’s not hard to see why Taikka attracts so much interest wherever it goes. It is made from pineapple skins – but from pineapples that were not grown for manufacture, but are a bi-product of the existing agricultural trade in fruit.

Riikka informs me that approximately 21 million tonnes of pineapple skin is wasted every year – the Pinatex is a bi-product of this waste. Produced in the Philippines, the world’s largest pineapple producer, no over-farming is necessary, the soil is not exhausted to satisfy a couture-fiend’s habit. Being made from natural substances – means it is biodegradable. It will return to the soil from whence it came – free from toxins, evil dyes and poisonous glues.

Friendship is a beautiful thing. So is the symphony that is created when it is combined with an ethical vision. Affordable, fairtrade, fun, functional and beautiful – I could talk to you about Taikka bags all day. But I won’t. The moral of the story is this:- always say yes to karaoke parties and don’t be afraid to try something new. Check out the new range of Taikka bags now.

Visit the WorkinFashion//Store to purchase the bags. 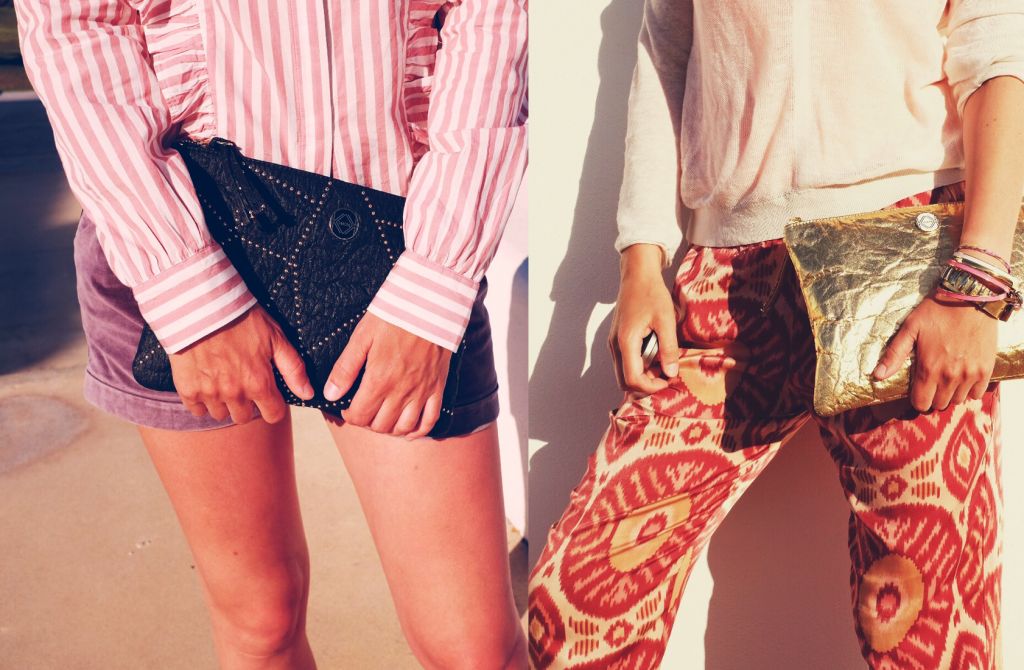